After four decades of serving the Kansas City, MO area with insulation services, The Hayes Company expanded to extend its services to builders and homeowners in the greater Nashville, TN area. Our services include fiberglass and spray foam insulation and air sealing for new residential and existing residential properties. Whether your job is big or small, you can trust it to our professional team in Tennessee.

Contact The Hayes Company for Insulation Services in Nashville, TN

The Hayes Company – Nashville Specializes in:

A Business Founded on Integrity

Since the start of our family-owned business, we have made it a priority to offer our customers high quality building products matched with superior service. We believe that combination is what has allowed our business to grow and thrive. When you work with us, you can expect exceptional workmanship and resources as well as professional, trained staff who have a strong attention to detail. Our approach includes a well developed plan centered on a schedule that we adhere to, as well as regular communication. We work this way because we don’t want one-time customers. Instead, we want the homeowners, builders and commercial contractors we serve to remain loyal, lifetime friends. Pete Hayes officially joined The Hayes Company in 2017. Prior to joining the company and launching the Nashville branch, Pete worked in the automotive industry. Growing up he spent most summers working for his father’s insulation company. Pete joined The Hayes Company because of his belief in continuing and strengthening the legacy of his father’s company. Working with his family is not a bad thing either – Pete enjoys the opportunity to work with his brothers.

Pete’s favorite part of the job is the opportunity to build and strengthen relationships with The Hayes Company employees and builder customers. His free time consists of spending time with his kids and enjoying a book when time allows. 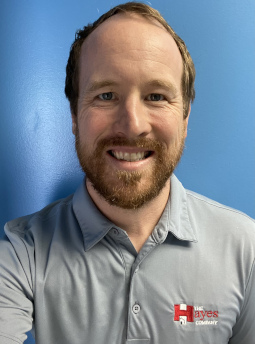 Donnie joined The Hayes Company’s Nashville team in 2022 as Operations Manager. His favorite part of his role is having the opportunity to help homeowners and builders turn houses into homes by taking care of both the big and small things for them. Donnie also enjoys creating a fun culture with his Nashville team. In his down time, he loves to hike, play sports, and go on adventures with his family. Mary joined The Hayes Company Nashville team in the summer of 2021 as the office administrator. Mary says the best part of her job is getting to do the work she loves in a fun, supportive, and respectable work environment. In her spare time, Mary can be found spending time with her kids or working on projects around her house.

“Pete and his team have been great for our company. We are in a period of rebuilding and The Hayes Company has been a great addition to our trade partner roster. I strongly recommend Pete and his crew.”
Robert, contractor

“The Hayes Company did a great job for me. Got there when they said they would. The guys were courteous and efficient.”
Gary, homeowner

“I’ve built several homes and deal with subs on a semi regular basis. My experience with insulation people, until now has always been sub-par. The Hayes company did an older condo I reno’d in West Nashville. To my surprise and delight they exceeded my expectations. No corners were cut, they provided what was quoted plus some. My price was reasonable. They were responsive and on time. I was referred to them by a friend. My turn to pass on the good recommendation. Wish everyone did as good a job.”
Scott, contractor

Let’s discuss your project! Contact The Hayes Company in Nashville, TN and speak to one of our insulation experts. To find out more about our services or to schedule an estimate, call us at 615-395-5004. We will do an on-site assessment of your project, take measurements and provide you with an estimate at no charge.